Lord of the Flies!

Recently, I read an article from The Lookout that details a plan by PayPal founder Peter Thiel to build "sovereign nations on oil rig-like platforms" out in the ocean. Peter Thiel is a Silicon Valley billionaire tycoon whose eccentric idea is to collect a group of "libertarians" who want their own society that is "free from the laws, regulations, and moral codes of any existing place."


Thiel has been a big backer of the Seasteading Institute, which seeks to build sovereign nations on oil rig-like platforms to occupy waters beyond the reach of law-of-the-sea treaties. The idea is for these countries to start from scratch–free from the laws, regulations, and moral codes of any existing place. Details says the experiment would be “a kind of floating petri dish for implementing policies that libertarians, stymied by indifference at the voting booths, have been unable to advance: no welfare, looser building codes, no minimum wage, and few restrictions on weapons.” 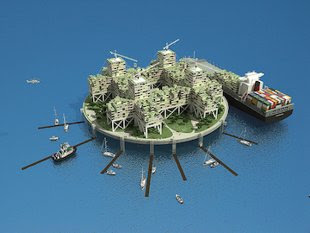 Now, what really intrigued me from the article is his idea to start "from scratch free" a society "free of regulations and moral codes from any existing place." I immediately thought of an old book that many of us had to read in high school. The name of this book is Lord of the Flies! The book is about a group of kids that becomes stranded on a desert island after the plane the group was in crashes after a nuclear war. The book beautifully illustrates a "group of people" who slowly reject all Christian law and descend into humanistic "self-rule" with no need for a God or his law and free themselves from the "moral codes of any existing place"! As the book progresses, the group of youths becomes more and more animalistic in behavior until order and safety is finally restored by the arrival of a military rescue team.

It was comical to me from The Lookout article that the people wanted looser building codes! I was wondering if that applied to the oil rig-like platform they wanted to build? Would they insist to its builders that they disregard physical and building laws relied upon to build their floating nation? Would a weld or even the steel used have to meet some type of minimal standard for safety or would the builders have the "liberty" to use whatever material they thought was sufficient? This would also apply to all the various building on this platform and minimal or no requirements for their construction.

Then there was the statement "free from the laws....and moral codes from any existing place"! Are you kidding me! Whose moral code, if any, was going to rule the platform? When some type of disagreement or problem arose, what "code" would they consult as their standard of right and wrong? Who would establish this code and by what method? What if there were people on the platform who did not agree with the "code" and insisted that their "code" apply instead. What about "pirates" who invaded the platform and wanted to rape and pillage? What moral code would the inhabitants of the platform want to apply to or force upon them? These and similar questions will pose a tough challenge to "libertarians" insisting on personal liberty!

The truth of the matter is that this idea of a moral code free from an already existing place has already been tried in Russia, Cuba, Cambodia, and in other countries...and is on the rise in the United States. It has met with the same disastrous results as the boys in the Lord of the Flies movie - chaos, death, and tyranny!


Why do the nations conspire
and the peoples plot in vain?
The kings of the earth take their stand
and the rulers gather together
against the Lord
and against his Anointed One.
“Let us break their chains,” they say,
“and throw off their fetters.”


When man tries to free himself of God's moral laws, disaster is the end result! Man can no more exist free from God's moral law than a fish can survive out of water. Every attempt to violate or set aside God's moral law ends badly for man.


The One enthroned in heaven laughs;
the Lord scoffs at them.
Then he rebukes them in his anger
and terrifies them in his wrath...


If this "utopian island" ever comes to fruition, it will be interesting to see the "moral code" established and enforced and what it is ultimately based on! Hopefully, the construction and material of the island itself will have firm and established laws that are not arbitrarily left to the discretion of the builders or planners. If they are, like their self-determined and established "moral code," rescue will only come from a firmly established code - that of God and not of man!

All aboard maties, if you dare!