Many of you may well remember the old 1960s television show Lost in Space. The show revolved around the travels, tribulations, and triumphs of the Robinson family as they drifted around the universe in search of Alpha Centauri or for a route to take them back to earth. When they begin their mission, they were sort of like Noah - sent out to search for a new world in which humanity could start over again. As the Robinson family began their journey, their spaceship is throw off course from the extra weight stowed on the ship in the form of Dr. Smith. Dr. Smith is a saboteur of the mission and has accidentally gotten trapped on board the Jupiter 2 as it embarks on its quest. The computers do not compensate for the extra weight, and the Jupiter 2 is sent hopelessly and uncontrollably off course into deep unexplored and unmapped space. Hence the title of the show - Lost in Space.


One of my favorite "characters" on the show was the robot that accompanies the Robinson family on their mission. Programmed by Dr. Smith at the start of the journey to destroy the Jupiter 2 once it was in space, the robot became the trusted companion and defender of the Robinson family as they encountered one form of alien life after another. Anyone who watched the show knows the robots famous warning when danger was near - Danger, Will Robinson, Danger!

A time has now come that we as Christians need to heed the robots warning of Danger, Will Robinson, Danger! Recently, Fox News reported that there had been a "pre-deployment briefing at Fort Hood Texas where those in attendance were informed that evangelical Christians and Tea Party members were a ’threat’ to the nation and any soldier donating to those groups would be subject to punishment under the Uniform Code of Military Justice." Never mind that Fort Hood was the horrific scene of "workplace violence" when Maj. Nidal M. Hassan, a radical Muslim, murdered 13 fellow soldiers in November 2009. Instead of focusing on and sounding warnings about radical Islam infiltrating the ranks of the U.S. military forces, intelligence agencies, or the U.S. government itself or the spread of anti-American propaganda within the plethora of Muslim mosques now springing up like poisonous weeds all across the fruited plain, the U.S. Army has now painted a target on the backs of American Christians with the intention of suppressing or destroying any type of criticism or resistance to the current administration's vision for our nation.

Seeking to implement their vision of what America should be, those now wielding power in the courts, academia, the press, military, or government are eliminating the "old order" of things to establish the "new order." Socialism, or humanism, is no friend of Christianity and will fight with all its might, fair or foul, to marginalize, demonize, or outright destroy any challengers to its position as the dominate worldview of the land. All challengers will be crushed, and Christianity is its number one threat and challenger.

Why must Christianity be fought by these people you may ask. The answer is very simple - Christianity provides a view of the world that is diametrically opposed to their current view of the world and life. At every point, Christianity challenges the presuppositions and ideas of these people with God's infallible Word. God defines everything and is the source of all truth and knowledge. However, mankind has thrown off the definitions and restrictions that God has established and has defined its own terms and sanctions concerning life. It is this war of ideas that Christians find themselves engaged in with a winner-take-all prize.

When Christian and conservative groups are singled out by the U.S. military and our political leaders for scrutiny as potential domestic terrorists, the real terrorists - by default or purposefully - are supported and encouraged in their destructive mission. We can only wonder from what source our military and cultural leaders are getting their misguided intelligence in the promotion and instituting of these ideas and laws. As our country's cultural institutions continue their slide away from God and his law, may we recognize the very real threat we as Christians pose to those in power and the increased political, legal, and possibly physical pressure we may face in the days ahead. We do not wage war with weapons of this world, but we battle with spiritual weapons provided by God himself that are mighty to defeat every thought or law that takes a stand against God and His anointed. God himself can and will fight His own battles with an intelligence no man, nation, or military can fathom. Psalm 2 prophetically and succinctly states that to be at war with God is not the "intelligent" thing to do.


Therefore, you kings, be wise;
be warned, you rulers of the earth.Serve the Lord with fear
and celebrate his rule with trembling.
Kiss his son, or he will be angry
and your way will lead to your destruction,
for his wrath can flare up in a moment.
Blessed are all who take refuge in him.


May we be wise in our thinking and kiss the son, fear the Lord, and serve Him with total devotion. Let us take refuge in Him and His mighty power and celebrate His everlasting rule with trembling, confidence and great joy!
.
Stay Holy, My Friends!

A Doctorate in Absurdity!


Question: What happens when you cross a pig with California Governor Jerry Brown?
Answer: Nothing! There are some things even a pig won't do! 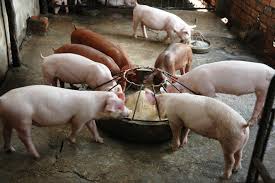 If you think that some of our politicians couldn't possibly get any worse in their personal and professional lives or enact sweeping legislation devoid of any reason or common sense, it's time to think again. Governor Jerry Brown of California just lowered the bar of lower expectations. On September 30th, Governor Jerry Brown signed into law in the state of California a law that allows non-physicians to perform abortions in the first trimester of pregnancy! This new law was not only signed by the Governor, but it was also passed in both houses of the state legislature with overwhelming support. Also supporting and hailing the passage of the bill was the champion defender of safe, legal, and rare abortions - Planned Parenthood.

For years, we have been forced fed the liberal mantra of safe, legal, and rare in order to enact and justify abortion as the law of the land. However, now we can rightly dispense with all pretenses of "concern for the mother's health." Many of us were never taken in by the left's pious-sounding platitudes when the topic of abortion was discussed in the public arena, but a vast segment of Americans still feigning empathy for young women with "unwanted pregnancies," clamored for "humane laws" that would protect these "victims" from the back alley butchers. Forget about the back-alley predators preying on young, gullible, and defensiveness women, the predators have been welcomed into the abortion clinics with open arms and with the blessing of the state politicians and the California Medical Association. We don't need no stinking doctors.

Amazing to me is the fact that the new law was backed and pushed forward by the California Medical Association. This group is comprised of physicians and health "professionals," who - according to the organizational history listed on the group's website - will: Confront the challenges of rampant quackery, epidemics of contagious disease, and a desperate need to establish standards for the profession, physician leaders of the time called upon their colleagues to help them form the Medical Society of the State of California (as it was called back then) "to develop, in the highest possible degree, the scientific truths embodied in the profession."

What a bunch of hogwash! I guess allowing "clinicians" - whatever and whomever that term may describe - who have been trained for a couple of weeks in preforming abortions are now medically competent enough to preform this relatively "minor surgery" and are fully supported by the CMA and their professed vision and mission statement. Prior to this law being enacted, only licensed "doctors" could perform an abortion because of the great medical and psychological risk associated with the procedure! Forget all that, we are now being told that this is such a "minor" and "safe procedure" that "doctors" - with all their training and schooling - can stand idly by while someone with very minimal training can do their job as well as they could. Talk about creating new jobs and stimulating the economy.

As I thought about this new law and the support it had from Planned Parenthood, the California Medical Association, most of the legislators, and every leftist or progressive supporter, I wondered why these groups would support such an idiotic and dangerous law for women. Weren't these groups looking out for the safety and welfare of women like we had been told ad nauseam over the years? Of course, the answer to that question has always been apparent to anyone with an ounce of intelligence. Abortion, in case you did not know, has never been about a woman's right to choose or about making abortion safe, legal and rare. It has been about the control of certain groups of people and about making MONEY. Margret Sanger, Planned Parenthood's founder, made no bones about her desired purpose to see legalized abortion the law of the land in order to control certain minority groups. Read her history and the history of Planned Parenthood if you want more information about this infamous, bigoted, genocidal elitist group.


Depraved mankind will always make laws and behave contrary to the expressed will of God because - like Adam and Eve - mankind wants to be like God - establishing their own standard of what constitutes good and evil. The further a society slips away from God and his holy standard, the more the profane will become the acceptable and the unimaginable become the common. When a society begins to allow and sanction non-doctors to perform serious medical procedures is there any other outrageous en devour that politicians will not keep their hands off of or allow?  Is the day when the patients run the asylum now upon us? Calling Dr. Howard, Dr. Fine, and Dr. Howard - you're needed in Emergency - NOW!