Brother, Can You Spare A Nickel?


One thing that I have learned over the years by watching The Three Stooges is that they ALWAYS KNOW what they want! It may be money, a job, helping some unfortunate soul accomplish something, or attracting some beautiful women to marry them, but they are always in agreement with each other over their ultimate goals. Although they fail the majority of time to obtain what they want, they put in a good effort and try their hardest, even if it means getting slapped by Moe for their impetuous behavior. In the short video above, Larry knows what he wants. He asks for one of Professor Nickel's daughters by asking the professor, "Brother, can you spare a nickle?"!

Recently, Wall Street - as well as several major cities - has been besieged by numerous people from all over the country who have decided that they are going to protest until they receive an acceptable answer to their grievances. The only problem with almost all these protesters is that they have no real idea what they are protesting in the first place and they are not united in their complaints. Some are convinced that capitalism must be abolished while others are yelling incoherently about social justice! Others are demanding justice for Troy David, support for Iran, prosecution of those involved with corporate greed, elimination of  debt on students loans, a violent left-wing revolutionary coup of the United States government, and a host of other far-left wing political causes. One blogging protester went so far as to say that the protest is not a protest at all but a "church of dissent" for all those who want to dissent about something! 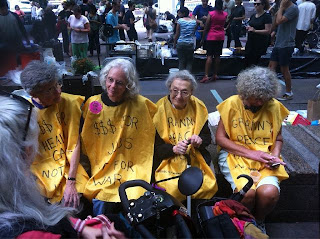 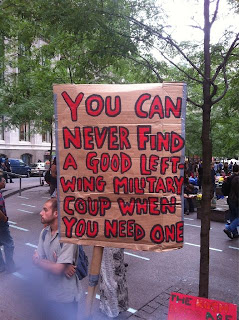 The following is taken from a blog by Matt Stoller, former senior policy advisor to Rep. Alan Grayson and a fellow at the Roosevelt Institute:


But I think there’s something to add about what exactly this protest is, what it is doing, and most of all, what the people there “want.” They don’t have a formal list of demands.

What these people are doing is building, for lack of a better word, a church of dissent. It’s not a march, though marches are spinning off of the campground. It’s not even a protest, really. It is a group of people, gathered together, to create a public space-seeking meaning in their culture. They are asserting, together, to each other and to themselves, “we matter.”

Huh! Got That? "We matter"! "They are asserting, together, to each other and to themselves, "we matter!" What in the world does that mean! Does it mean that evolution is true and that everyone is really just "matter" so we matter? Or does it mean that "matter" means they are "madder" than everyone else? Or could it possibly be the new name of the "church of dissent" We Matter?  We matter for what? Every cause under the sun or no real major cause in particular? What is it that you really want! We can't help you if we, or you, do not know!

Like these energetic, unorganized, uniformed and unkempt protesters, most of the modern day church suffers from the same madness these protesters do. It doesn't know what it truly wants! Some in the church want acceptance of all people no matter what their individual beliefs are. Others only want those who achieve a high moral standard, like themselves, and separate themselves from all the "ungodly" worldly things. Then there are others who ask not what they can do for the church, but what the church can do for them or their children. When the church loses its focus from the main objective and becomes preoccupied with personal agendas, the church becomes "Balkanized" and marginalized in its impart in the culture.


But you will receive power when the Holy Spirit comes on you; and you will be my witnesses in Jerusalem, and in all Judea and Samaria, and to the ends of the earth.”

Our main objective is the conversion of the world and the discipling of all nations in the teachings of our Lord and Savior Jesus Christ. Applying his teaching to ALL areas of life will bring about a transformation - the likes of which the world has never seen. To allow ourselves to be sidetracked from the main mission is to be brother to him who destroys.


One who is slack in his work is brother to one who destroys.

May we continually stay focused on the fulfillment of our mission. May we not be like the Wall Street Occupiers who are scattered in their viewpoints, unorganized in their mission, and don't really know corporately what they want! May we know what we truly want, when like Larry Fine asks, "Brother, can you spare a nickel?"