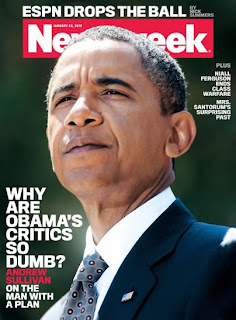 The latest copy of Newsweek magazine just hit the stands and the cover picture and title reveal more about Newsweek's vision and purpose than you might think! Newsweek has never been a magazine that I enjoy reading, but this latest issue caught my attention and sparked a strong reaction in my stomach. Newsweek magazine is nothing more than a liberal propaganda rag with a non-stated mission to undermine, ridicule, and demonize all remnants of Biblical morality, law, and theology in our country today. Many of Newsweek's covers give away the farm as they constantly promote left-wing ideologies unapologetically, but very subtly! With the backing and adulation of the current mainstream media, entertainment industry, educational establishment, and the Democratic Political Party, Newsweek - like many other "left wing ideology" magazines - seeks to influence the current culture with a worldview contrary to Biblical Christianity!

According to Newsweek, apparently anyone who takes any position contrary to that of the President is dumb! There is no room for open and honest debate, no room for compromise, no room for the possibility of being wrong - only a flat out infallible declaration that the President is "always correct" or "smarter" than his critics. Not to be able to see the "brilliance" of his positions and plans are comparable to the townspeople in The Emperor's New Clothes! So much for Christians being the close-minded ones or the people intolerant of the ideas of others!

Referring to all opponents as ignorant, dumb, Neanderthals, or any other derogatory term currently popular is an old political technique that has been around for millenniums!  To fall prey to this old ruse is an example of people more concerned about what others think rather than thinking about what really matters or is right or wrong!

Below I have listed just some "mistakes" our "smart" President has made in the past. You will not read about these "mistakes" in any liberal magazine or hear them talked about on any liberal news station. You will have to tune in to one of those "far-right" news stations or blogs to hear about his mistakes. I have listed them here to illustrate a point - to portray any individual as smarter than everyone else is to elevate the person to almost divine status and to question the person's ideas is blaspheme worthy of banishment to the back pages, public ridicule, or burning them at the stake of public opinion! Take a moment to read these statements then decide for yourself if you are really that "dumb"!

As Christians, we should heed the example of the Bereans and check EVERYTHING against the inerrant scriptures. This does not mean every question has a direct answer in the scriptures. It does mean that there is a Biblical principal relating to EVERY question asked. Politics, economics, philosophy, psychology, and EVERY other "ology" known to mankind is based on religious presuppositions whether acknowledged or not.

As the political season warms up and political promises are made or social issues discussed and debated, remember that we as Christians must engage the culture at every opportunity with the spiritual weapons at our disposal. To stand idly by in this day and hour is to further surrender the culture to spiritual con-men, charlatans, deceivers, and "real dummies" intent on spreading their "gospel" of good news. Now, get to work -You Big Dummies!