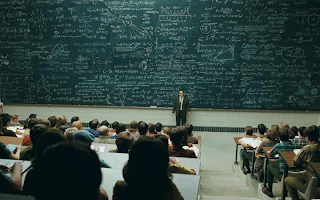 It has been a couple of weeks since my last blog due to an overwhelming personal schedule, but I'm ready to get back at it with renewed vigor!

Last Thursday at Henry Ford Community College, I participated in a debate with an apologist from Islam. The debate was arraigned by the Christian Club and the Muslim Association at Henry Ford Community College and was held in the Liberal Arts building on the campus. Tickets were free, and seating was on a first-come-first-served basis. The main topic of the debate was "Who is Jesus? - Prophet or God." Naturally, I took the position of presenting the evidence for the divinity of Jesus while my opponent, Shadid Lewis, took the position that Jesus was not God, but rather a prophet. My opponent was a convert to Islam from Christianity, while I am a convert from human self-determinism to Christianity.

Preparing for the debate was a lengthy and studious task, since I had never debated anyone from an Islamic point of view concerning the deity of Jesus Christ. With doors opening in our community to minister to local Muslims, I planned out a strategy and set about logically establishing one point after another concerning my subject. I probably spent close to forty hours in preparation time, prayer, studying, and fasting. Needless to say, the preparation was exhaustive and comprehensive. I was also contacted by Sam Shanoun from Answering-Islam.org. He provided me with a great deal of invaluable information concerning Islam and the defense of the Biblical position of Jesus' deity.


But in your hearts set apart Christ as Lord. Always be prepared to give an answer to everyone who asks you to give the reason for the hope that you have. But do this with gentleness and respect...


My strategy was to present scriptures that clearly proclaim the fact that Jesus is God. I knew from watching Christian/Muslim debates on YouTube that my opponent would try to attack and undermine these scriptures through false or limited definitions, out of context quotations, the obfuscation of Christian teaching, or ridicule concerning the nature of Jesus Christ. Knowing all this, I felt I was just to present the scriptures to the audience and let the Spirit of God move upon their hearts.


For the word of God is alive and active. Sharper than any double-edged sword, it penetrates even to dividing soul and spirit, joints and marrow; it judges the thoughts and attitudes of the heart. Nothing in all creation is hidden from God’s sight. Everything is uncovered and laid bare before the eyes of him to whom we must give account.


The debate went as I had anticipated and planned for. The audience, from my point of view, listened to my presentation with rapt attention with smiles on their faces. I could see many of the Muslim students writing out various Bible references as I spoke while the same students dallied with their phones when my opponent spoke. After the debate, there were approximately 12-15 young female Muslim students who besieged me with questions concerning the Bible, Jesus' deity, salvation, and a host of other Christian-related questions. Others from DC3 also had the opportunity to speak and explain the Christian message of hope to these young Muslim students. A couple of our members also had the chance to pray with some of these students. Also, after the debate, we were able to give away 10 Bibles and an assortment of tracts and books.

Once again I want to thank everyone  who contributed to the success of the debate through their hard work, prayer, fasting, and show of support. Your contributions were greatly appreciated! I cannot tell each of you how your attendance at the debate encouraged and strengthened me. It was a tremendous blessing to me just to see all of you there in support of this all important issue. May the seed that we cast find good soil and nourishment. May God provide those who will water the seeds and tend their growth while giving each of us a renewed and deepened burden for those trapped in the darkness of Islam.


What, after all, is Apollos? And what is Paul? Only servants, through whom you came to believe—as the Lord has assigned to each his task. I planted the seed, Apollos watered it, but God has been making it grow. So neither the one who plants nor the one who waters is anything, but only God, who makes things grow.


The debate made me realize the opportunity and responsibility we all have in our communities to reach out with the good news of Jesus Christ and His kingdom. There is no debating the fact that we are commanded to disciple ALL nations with the gospel and to teach them EVERYTHING that he has commanded. We are to present the gospel without wavering from or watering down the message and to stand on His truth no matter the response from any group of people. It is God's responsibility to bring growth to the seed that we plant. Our job is to plant and water...Now, that's non-debatable!


Well, Old Buddha was a man and I'm sure that he meant well
But I pray for his disciples lest they wind up in hell
And I'm sure that old Mohammed thought he knew the way
But it won't be Hare Krishna we stand before on The Judgment Day.

Well, I don't hate anybody so please don't take me wrong
But there really is a message to this simple song
You see there's only one way Jesus if eternal life is your goal
Meditation of the mind won't save your soul.

Well, you can call yourself a Baptist and not be born again
A Presbyterian or a Methodist and still die in your sin
You can even be Charismatic shout and dance and jump a few
But if you hate your brother you wont be one of The Chosen Few.

Cause it won't be a Baptist that's sitting on The Throne
A Presbyterian or a Methodist that's calling us Home
And it won't be a Charismatic that plays that trumpet tune
So let's all just live for Jesus 'cause He's coming back real soon.
[ Lyrics from: http://www.lyricsmode.com/lyrics/i/imperials/oh_buddha.html ]