With the sounding of those highly anticipated words, hope springs eternal in the hearts of every baseball fan at the start of a new season. Forget last year and the failed expectations and disappointments - a new baseball season renews our youthful hope and gullibility that our favorite team can somehow reach new heights and finally win the World Series. Even fans of the Chicago Cubs will admit that there is a faint hope of possibility springing up in their heads that this year will finally bring about the acquisition of the long lost holy grail of baseball - a World Series Championship!

I remember going down to the old Tiger Stadium as a young fan in the 60's and watching my favorite players. In 1968, players such as Al Kaline, Norm Cash, Willie Horton, Bill Freehan, Jim Northrup, and Mickey Lolich captured the city of Detroit's imagination as well as my own when they beat the St. Louis Cardinals in seven games to bring home the title. No ESPN or MLB Channel package existed to watch the games on back in those days. No - we had to sit by a transistor radio in school, straining our ears to hear what was going on with the games that were actually played in the afternoon! It seemed like the entire town came to a standstill as we hung on Ernie Harwell's every descriptive word. When Bill Freehan finally caught the last out, there was celebrating in the streets and the entire town came together to celebrate the exciting accomplishment of our hometown heroes.


In 1984, the Tigers did it again in dramatic fashion, starting the season off 35-5 and cruising through the regular season to the World Series in dominating fashion. Once in the World Series, they crushed the San Diego Padres and once again laid claim to the best baseball team in the world. Players such as Kirk Gibson, Chet Lemon, "Sweet" Lou Whitaker, Alan Trammell, "Lance" Parrish, and Jack "The Cat" Morris as well as many others brought renewed pride and hope to a city suffering through economic and civil unrest.


Over the course of the last few years, our beloved Tigers have been in the World Series two times, but have fallen short of the ultimate goal. As the 2013 season gets underway, hope of another World Series title is the topic of every local sports talk show host and water cooler conversation. With players such as Miguel Cabrera, Justin Verlander, Prince Fielder, Austin Jackson, Tori Hunter, and Victor Martinez, the anticipation of the Tigers returning to and winning the World Series this year brings to the city a common cause to rally behind and to cheer on. No matter where one may travel in or near the city of Detroit, excitement about the possible is a unifying force.

In the advancement of the kingdom of God throughout the world today, a common excitement should exist to fuel the evangelism and mission outreaches to all parts of the world. With Hall of Famers such as Paul of Tarsus, Peter "The Rock," "The Sons of Thunder" John and James, or "Doctor" Luke rooting us onward toward the ultimate prize, it would be a tragedy if we were to perform below their expectations. Unfortunately, most Christians today sense no anticipation or joy in the work that has been set before them or neglect to honor the players of the past by competing just as hard as they did to bring about victory for their team owner, Jesus Christ. The writer of the book of Hebrews instructs his audience:

We do this by keeping our eyes on Jesus, the champion who initiates and perfects our faith. Because of the joy awaiting him, he endured the cross, disregarding its shame. Now he is seated in the place of honor beside God's throne.


Like the excitement surrounding the city of Detroit concerning the possibility of the Tigers going to and winning the World Series this year, may we look forward while keeping our eyes focused on Jesus, anticipating the victories and ultimate successes he will bring to us as we proceed into the season ahead of us. May we cast off the defeatist, forlorn, and depressing spirit of a Chicago Cubs fan at the end of a season and run the race ahead of us with full confidence and assurance that our "Captain" will lead us from victory to victory! 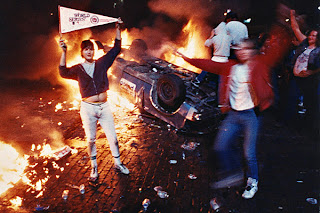