Recently a professional football player by the name of James Harrison, who currently plays for the Pittsburgh Steelers, made national news by tweeting that he was sending back a "participation" trophy to an organization for which his sons played. Mr. Harrison tweeted that he did not want his sons being rewarded for something they did not earn. His rational was based on the fact that his sons did not win a championship and that mere participation in something did not somehow make them worthy of recognition and some type of reward. In our modern culture of "always praising any accomplishment or attempt at something," Mr. Harrison's comments were the target of many modern psychobabble counselors and politically-correct pundits appalled by his so-called insensitivity toward his sons' emotional, psychological, and sociological development!

“I came home to find out that my boys received two trophies for nothing - participation trophies!” Harrison wrote. “While I am very proud of my boys for everything they do and will encourage them till the day I die, these trophies will be given back until they EARN a real trophy. I’m sorry I’m not sorry for believing that everything in life should be earned and I’m not about to raise two boys to be men by making them believe that they are entitled to something just because they tried their best…cause sometimes your best is not enough, and that should drive you to want to do better…not cry and whine until somebody gives you something to shut u up and keep you happy.”


Ashley Merryman, co-author of "Top Dog: The Science of Winning and Losing," says there are many reasons to be concerned about the "everyone gets a trophy no matter what" culture.Brutally Honest: Is it OK to let your child fail? "The idea was if we give kids trophies, if we tell them they're wonderful, if we tell them they're special, they'll sort of develop a sense of fearlessness and then they'll actually be more willing to do difficult things, and actually we now have about 20 years of research that shows that's not true," said Merryman. "That if you tell a kid they're wonderful and they believe you, then it just confirms their belief and that's not about healthy self-esteem, that's about narcissism."


I could not help but think about how this story relates to some Christians who think they deserve some type of recognition or reward just because they "serve" in the church in some capacity. These people are looking for constant acknowledgments or serve under some type of selfish ambition and look at "participation" in the church as some type of rung to ascend on where they can be recognized for their "duty," "faithfulness," or "devotion" without really putting in the time, effort, or finances to make things better. "Just participating" in the mind of these people qualifies as "wholehearted ministry" unto the Lord.


According to Wikipedia, Sloth - referring to laziness - is one of the seven deadly sins in Christian moral tradition, particularly within Catholicism. Sloth is defined as spiritual or emotional apathy, neglecting what God has spoken, and being physically and emotionally inactive. It can also be either an outright refusal or merely a carelessness in the performance of one's obligations, especially spiritual, moral or legal obligations. Sloth can also indicate a wasting due to lack of use, concerning a person, place, thing, skill, or intangible ideal that would require maintenance, refinement, or support to continue to exist.

James Harrison recognizes the value of working to really earn something. Mere activity in something does not necessarily mean someone is doing something good, correct, or wholeheartedly. The Apostle Paul tells us to run the race in such a way as to win (1st Corinthians 9:24). In order to do that, we must train hard with a clear goal in mind, observe the rules we need to operate under, and truly value the prize we seek. To violate any of these rules would be ultimately to seek only a "participation" trophy and not the top prize for being a champion. James Harrison is on to something-if it isn't a recognition for being the best one can be, being recognized for just showing up is a shallow reward and fools nobody. Obviously James does not want his "boyz" to just participate in something, he wants them to become men, knowing failure and success. He wants them to train and participate to win something of real value and not be satisfied with a cheapened recognition. 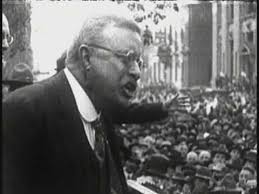 
“It is not the critic who counts; not the man who points out how the strong man stumbles, or where the doer of deeds could have done them better. The credit belongs to the man who is actually in the arena, whose face is marred by dust and sweat and blood; who strives valiantly; who errs, who comes short again and again, because there is no effort without error and shortcoming; but who does actually strive to do the deeds; who knows great enthusiasms, the great devotions; who spends himself in a worthy cause; who at the best knows in the end the triumph of high achievement, and who at the worst, if he fails, at least fails while daring greatly, so that his place shall never be with those cold and timid souls who neither know victory nor defeat.”