The Fonz and the Fasz! 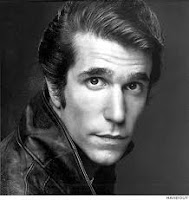 In the mid 1970s, Arthur Fonzarelli - or The Fonz - was the featured star of a hit television show called Happy Days. The Fonz was a mysterious, black leather jacketed ladies man and close personal friend to Richie Cunningham and his two friends Ralph Malph and Potsie Webber. The Fonz was loved by his television audience and his friends on the show because he was fearless and could always be found by his friends to be close at hand when they got in trouble. The Fonz also had an unbelievable charming charisma with all the women and an ability to make the jute box play music with just a slap from his hand. Throughout the many episodes of Happy Days, the Fonz grew into a larger-than-life personality and eventually replaced Richie Cunningham and his friends as the main character in the series. From his thumbs-up signal with an joyous sounding ehhhhh indicating that every thing was OK to his tough-standing posture when confronted by bad guys, the Fonz truly was a joy to watch as he operated and influenced people through the exercise of his unusual giftings.

Over the past weekend, Pastor Craig Fasler was the guest speaker at Downriver Christian Community Church. Pastor Fasler - or the Fasz as I like to call him - has spoken at the church on previous occasions and has always left a lasting impression. His wit, personal stories, and dramatic presentations inspire and challenge young and old alike. Like the Fonz from the Happy Days episodes, the Fasz has a magical and unique way about him while ministering with a passion and an anointing for evangelism and healing.

The Fasz ministered three times during the weekend and led a team of people to the nearby shopping mall for some street evangelism. His sentimental and tender side was revealed when he called for a church "group hug" at the Sunday night service. His ministry at the church was greatly appreciated and received by all in attendance and will be talked about, laughed about, and remembered fondly.

As Pastor (Fasz) Fasler returns home, may we continue to be motivated to evangelize and pray for healing for those with whom the Lord brings us in contact. May we use whatever "unusual giftings" the Lord has given to us for his service with an undying passion and fresh anointing! When we see the Lord move in these areas of our lives in new and mighty ways, may we be like the Fonz of television fame - or the Fasz of New Jersey fame - and give a thumbs up to the Lord and say - ehhhhhh! Thank you, Jesus!