Beware of the Hellhounds!

Every now and then, I come across a video that I must watch over and over because it is so enjoyable and reassuring to me that people sow what they reap. There is something exciting about seeing an "underdog" turn the tables on a formidable foe and take the fight to them. Think of all the modern movies like Rambo or Rocky and how the "underdog" theme continues to make the writer and producers a great deal of money. The Bible is filled with such stories. When we witness a modern day example of an "underdog" getting an upper hand on some cocky, belligerent, and threatening opponent, it should stir our souls to righteous joy and action. Watch the following video for a real "treat" and discover that you can teach an "old dog" some new tricks!


The above video illustrates to me the well-known principle of fighting back when being attacked and abused for minding your own business. Like the two dogs in the video, Christians are just minding the kingdom's business when someone decides its time to throw a brick or two at the "passive" Christian dogs! Be it secularist, Islamist, or some other ideology/religion with a chip on its shoulder, the aggressors just can't let us go on with life. They feel its their personal responsibility to mock, intimidate, or assault Christianity and its followers and be free to do so without any repercussions. Bricks such as homosexual marriage, abortion rights, separation of church and state, evolution, socialism/communism, and a host of other street garbage weaponry are constantly bombarding the church in hopes of scaring churches and the people away or making them subservient or dominate to their culture.

Watch the following video for a great example of a "Christian" submitting to the psychological onslaught of a "politically correct" political position and passively "punting" to avoid unwanted controversy.

In ancient mythology, hellhounds were known as the bearers of death. When seen by a human being, death was imminent. They guarded the gates of hell and wreaked of the smell of hell fire. They were as black as coal, possessed super strength and speed and razor sharp teeth. They were also known to hunt lost souls in the after life. They terrorized all who saw them.

Its time for the church to stop being lap dogs to the modern culture and allow God to transform us into aggressive hellhounds, confronting the issues of our day, saving souls from eternal entrance into hell, wrecking of the smell of hell but untouched by its flames and influence. Standing in front of the gates of hell and its minions, it's time to boldly encounter all who would enter unaware of the eternal consequences they face. The church, under the influence and leading of the Holy Spirit, needs to step up its effort and response and discard our lap dog disposition. May we take up a hellhound spirit as the two dogs in the above video, unafraid of anything or anyone coming against us and attack - and not back down! 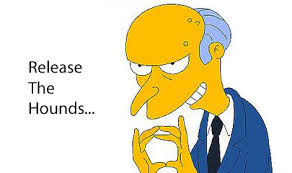