I'm always amazed and perplexed at what comes out of the mouth of some professing Christians when the spotlight is on them and they are given the opportunity to express an opinion on some particular topic. Pat Robertson and other "Christian leaders" have provided numerous memorable, perplexing, and brain-rattling quotes that have gone viral on the different social media outlets. Most of these quotes are not based on Biblical teachings and principals, but rather on human reasoning or feelings. It's no wonder that the "church" is mocked, ridiculed, and lampooned because of outrageous comments. 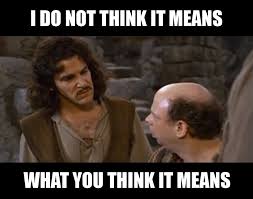 I was thinking about how Christians respond to these very important questions and seem to be out of sync and character with what the Bible really teaches. This question came to me clearly when I watched the Johnny Jam Boogie Snickers commercial starring Johnny Manziel - Heisman Trophy winner from 2013 and first-round draft pick of the Cleveland Browns. Those who follow Johnny Manziel's career are aware of his off-the-field exploits involving alcohol and women - a very powerful elixir combination for a young profession football player. The commercial I watched shows Johnny Manziel out of his "element" and teaching an aerobics class to a bunch of old women. He is portrayed as so out of character that one of his football teammates comes to his rescue and gives him a Snickers candy bar to eat. One bite from the candy bar and Johnny Jam Boogie turns back into his real self - Johnny Football. It's a humorous illustration of how out of character we all act if we are hungry.


The truth illustrated by this hilarious commercial is a great spiritual truth many of us still have not grasped. That truth is this: what you eat or don't eat affects what you say or do.

Recently, "Christian leaders" have spoken out about a particular subject and have reflected their own opinions or feelings instead of Biblical teachings or principles. Take for instance Joel Osteen's wife Victoria Osteen whose recent comments brought swift and critical comments from the "Christian" community at large. Mrs. Osteen suggested that God receives the greatest joy when we are happy. Is that really what the Bible teaches? Bill Cosby's response to her "preaching" pretty much sums up her theology and my feelings about her comments.


Or take for instance the famous "Christian worship/entertainer" Michael Gungor whose "insightful revelation" as to what Jesus might have taught or thought only reinforced the perception of many that many Christian entertainers lack any sensible and credible theological foundation in their music, art, or lives. “I think you’re making a lot of assumptions based in a perspective that was handed to you from our culture, and the way we think in the modern world is very different than how people thought in the pre-modern world,” Gungor said during the program.

“To just see a few words that somebody said, that Jesus said about Noah, and you assume that you can get into Jesus’ mind and know exactly how he thought about the whole situation, and how He considered history versus myth versus whatever – how do you know?”
“And even if He was wrong, even if He did believe that Noah was a historical person, or Adam was a historical person, and ended up being wrong, I don’t understand how that even would deny the divinity of Christ. The whole idea of the divinity of Christ being fully human and fully God, that God lowered Himself to become a human being with a human brain, in a human culture with human language and human needs and human limitations,” he explained.
“The point is it wouldn’t freak me out if He was wrong about it, in His human side. But I still don’t see the issue. If Noah and Adam were mythical ideas, the point of what Jesus was saying still applies to me. … It has very little to do, in my perspective, with Jesus trying to lay out a history of the world for a historical-minded people. … Even if Jesus knew that Noah and Adam were mythical, but knew He was talking to people who thought they were real, that’s another possibility. Jesus was just referring to a story he was part of to these Jewish people that know that story,” added Gungor.


When Christians speak authoritatively about a subject to the world, the content sure had better be scripturally sound. To voice an opinion contrary to what the scriptures declare is a very dangerous practice to initiate. I'm sure we all make mistakes or misspeak at times about what the Bible actually teaches, but when in doubt, maybe our policy should be to keep our mouths closed. Spouting silly platitudes and expounding philosophically about what Jesus thought or taught contrary to the scriptures is like Johnny Football leading old women in aerobics. It's out of character, odd, and confusing to those who know what you have been really called to do. When we find ourselves or our brothers and sisters acting in a strange and peculiar way, maybe its time for a Snickers bar!

Stay Holy and Hungry, My Friends!